Playing with Light (or the lack thereof)

I guess what I'm trying to say is, it's the photographer in me (and again I use that term loosely)
that notices how the light plays on certain objects at certain times of the day.
No matter what I'm doing, it makes me want to run and get my camera. 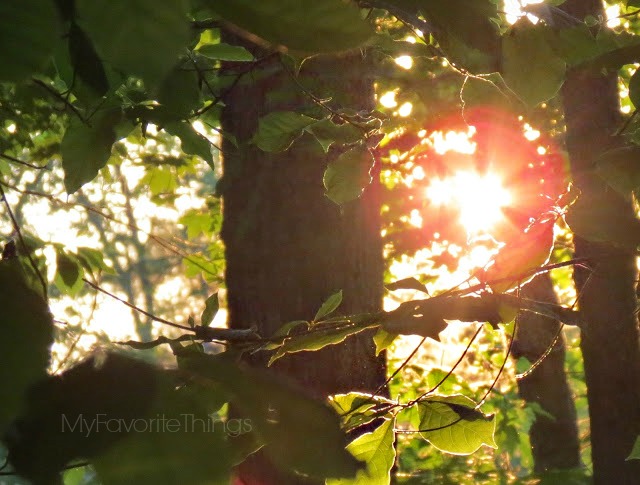 The evening sun sets through the woods in the backyard and when it's in that golden stage... 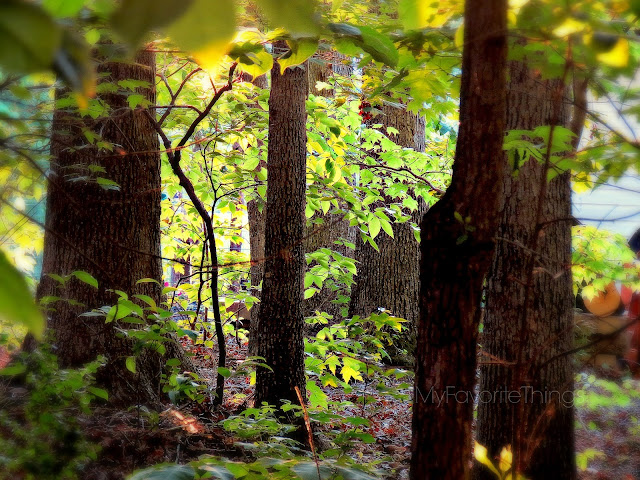 ...it sets the leaves aglow, creating the most beautiful effects. 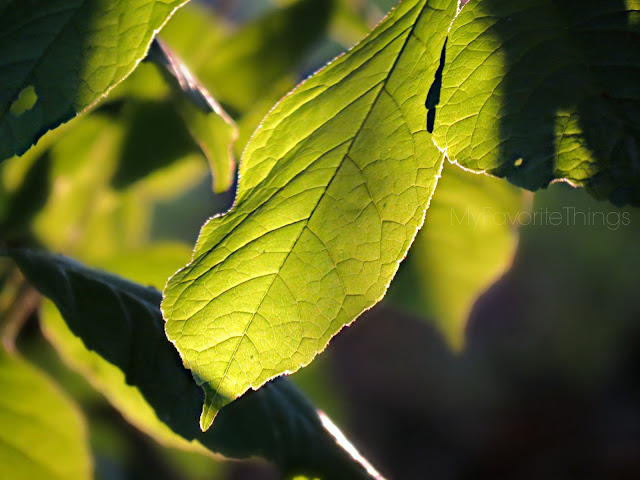 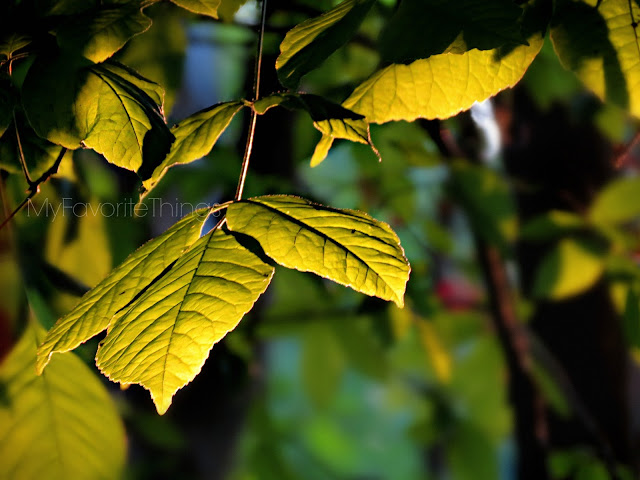 And as the sun continues to sink lower in the sky, the rays seem to set the woods on fire. 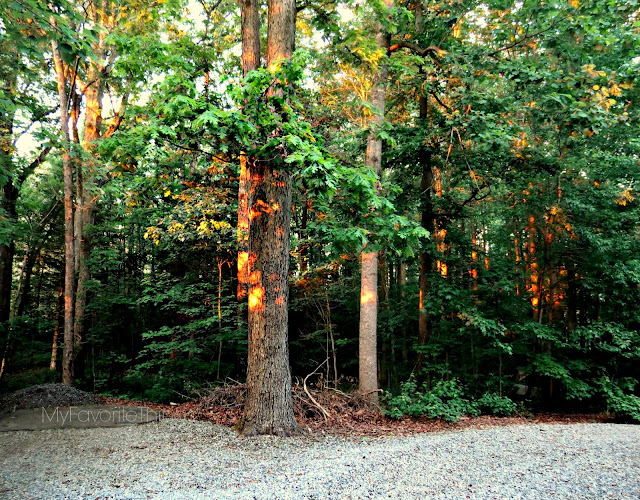 I have been waiting for this pink knock-out rose to bloom so I could distinguish it from the others. 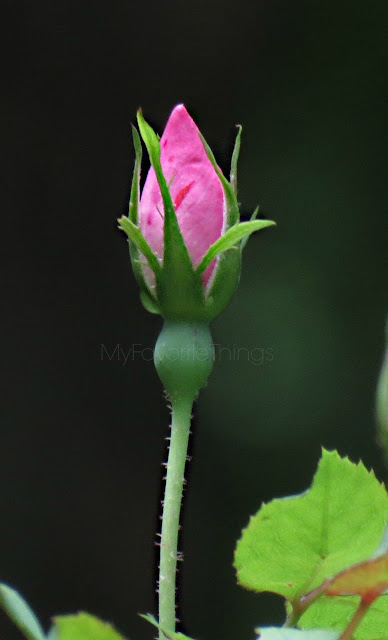 I had bought several small ones with no blooms and failed to mark them according to color. 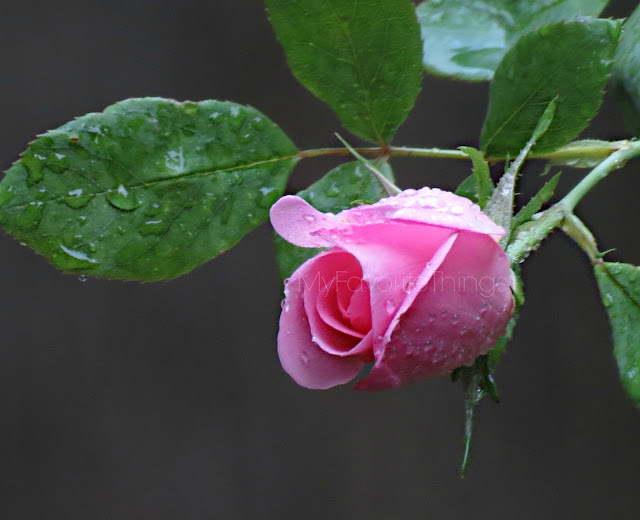 It opened up during a rainy night and I snapped these on the dark, dreary morning after. 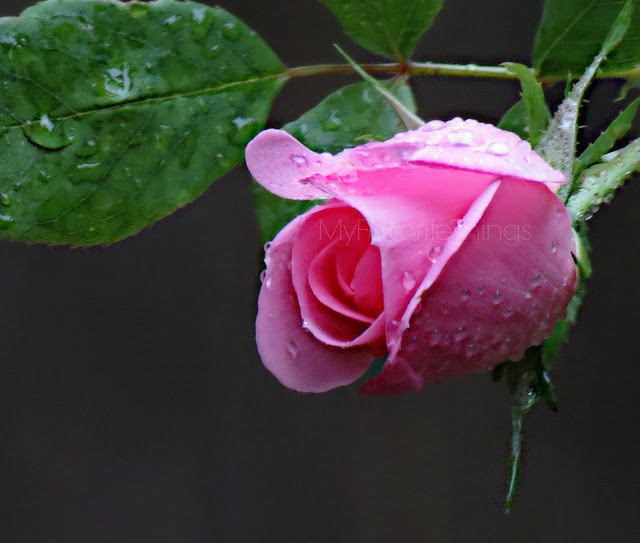 I was using a manual setting so I could adjust the light due to the lack of sunshine.
This is the same bloom a few hours later. 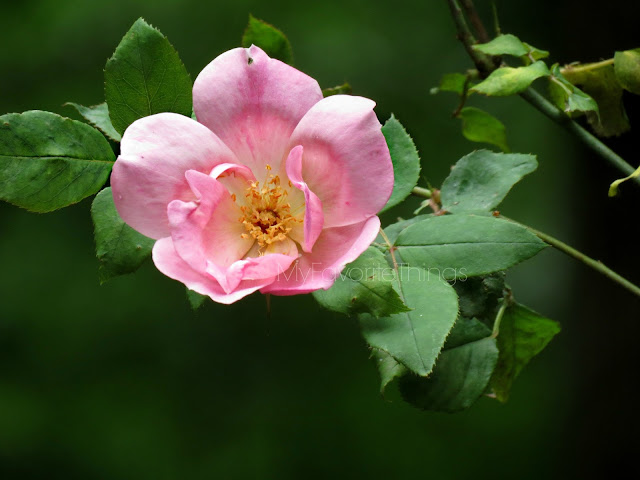 As I said, it had rained the night before,
leaving everything covered with little water droplets. 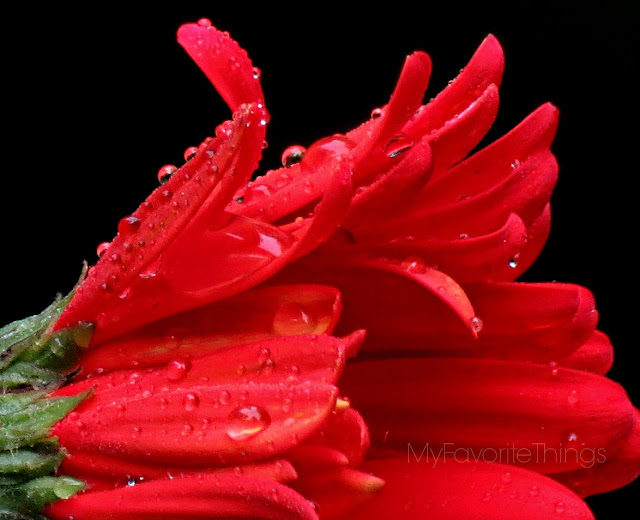 Have I told you how much I love little water droplets?? :) 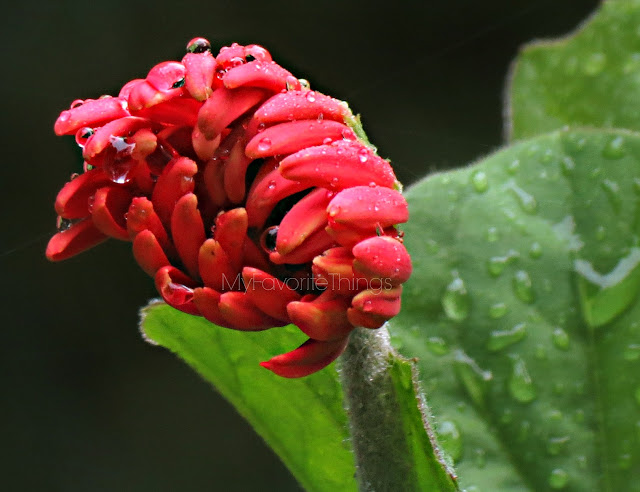 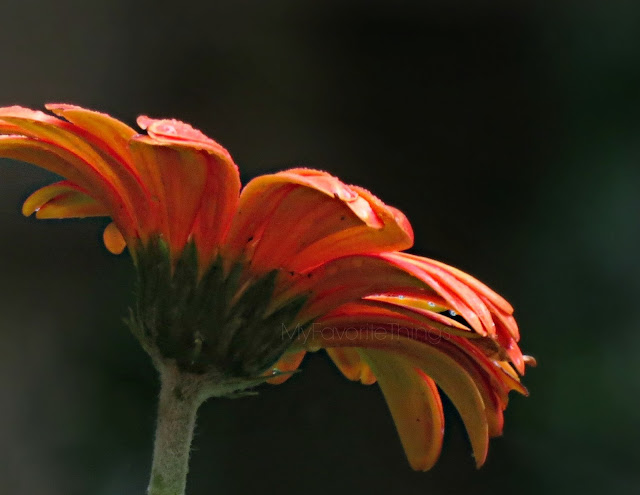 So it sounds as though the sunshine will be absent for the rest of the week around here.
I love little water drops but enough is enough.
And I have seen that a few of my northern friends are still getting some snow!
Come on, now!
~
But it is what it is...May...and I guess anything goes.
And so, my fellow photographers, enjoy your week and go out and find your light,
be it rain or shine...or even snow :)

Oh, Me of Little Faith

"And why are you worried about clothing? Observe how the lilies of the field grow; they do not toil nor do they spin, yet I say to you that not even Solomon in all his glory clothed himself like one of these. "But if God so clothes the grass of the field, which is alive today and tomorrow is thrown into the furnace, will He not much more clothe you? You of little faith!
Matthew 6:28-33 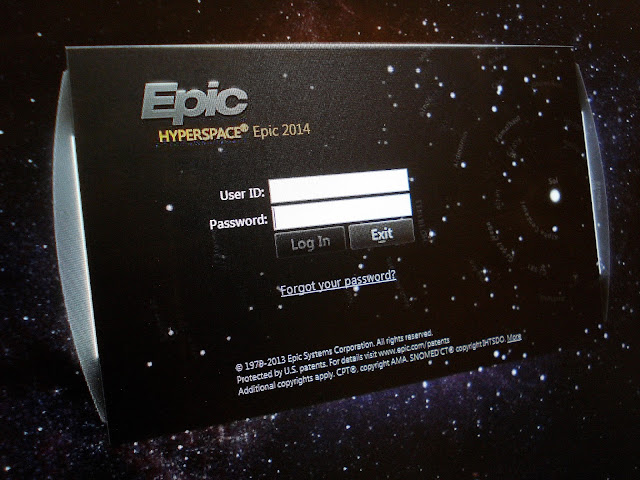 Yes, it's me...emerging out from under the Epic fog...
which as it turns out, hasn't been that terribly foggy after all.
~
I actually feel a little silly...quite foolish, really...
to have fretted so much over this transition like I have.
I don't remember the last time that I dreaded something so much as "going live" in Epic.
The apprehension was real and the little training that I received was quite daunting.
I was told by my supervisors that Epic was going to, and I quote, "rock my world"...
...and not in a good way.
At age sixty-one, who really needs their world rocked, anyway?
~
So last Monday morning, after very little sleep the night before,
I entered my office and this epic new world.
A very nice and quite funny gentleman (from the big hospital) named Robert was my helper.
Right from the get-go, I knew everything was going to be alright.
Upon our introductions, and after he surely noticed the uncertainty in my expressions,
I apologized to him right up front about the "dummy" he was going to be working with.
These were his words to me, said with a big grin,
"Hey, I'm not worried about a thing Ms. Debby...I've got Jesus!"

Well, of course my response back to him was, "Yeah, I do too!"
(even though my countenance at first didn't show it)
The ice was immediately broken and in just a few short moments,
most of my fear and doubts just kind of disappeared and I began to feel somewhat confident! 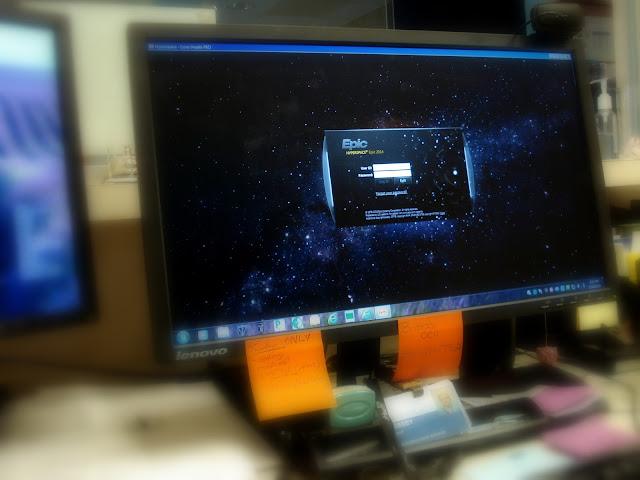 Yes...oh me of little faith.

But let him ask in faith, with no doubting,
for the one who doubts is like a wave of the sea that is driven and tossed by the wind.
James 1:6

The fear of the unknown and not really wanting to change is what was messing with my faith.
I know that fear does not come from God, but from dark places that still reside within me.

If any of you lacks wisdom, let him ask God, who gives generously to all without reproach,
and it will be given him. But let him ask in faith, with no doubting,
for the one who doubts is like a wave of the sea that is driven and tossed by the wind.
For that person must not suppose that he will receive anything from the Lord;
he is a double-minded man, unstable in all his ways.
James :5-8

I have no doubt that Robert was placed there by the Lord...just for me on that morning.

Trust in the Lord with all your heart, and do not lean on your own understanding.
Proverbs 3:5

Of course I have much to learn about all of the workings of Epic as we move forward,
but I am still in disbelief somewhat that the transition has gone this smoothly.
All of that worry, self-doubt and apprehension was not called for.
Lord, help me in my unbelief!

Do not be anxious about anything, but in everything by prayer and supplication with thanksgiving
let your requests be made known to God. And the peace of God, which surpasses all understanding,
will guard your hearts and your minds in Christ Jesus.
Philippians 4:6-7

So instead of letting Epic rock my world, I will be remembering this verse:

You keep him in perfect peace whose mind is stayed on you, because he trusts in you.
Trust in the Lord forever, for the Lord God is an everlasting rock.
Isaiah 26:3-4

I found this song which describes me to a tee.


Thanks for all of the prayers and kind words of encouragement, my friends :) 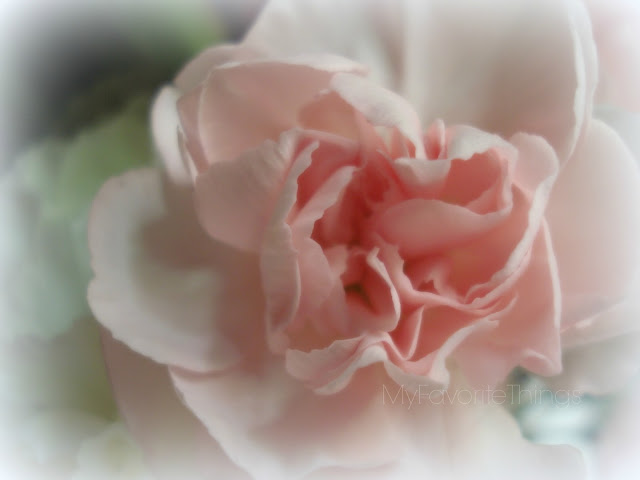 He's home and he looks so good.

There is a little more of him than there was the day he left (but that's okay),
and he has completed his program a little sooner than anticipated!

There is a newness about him...
...a desire to live for Jesus and to continue getting his life in order.
In some conversations, it seems like I'm talking to a different person.
I guess that's because he is different.

What an absolute blessing it was on this Mother's Day Sunday,
to look out into the congregation from the platform during praise and worship
and see him and his significant other, Michelle, sitting there together.
And what's more, as the pastor prayed a special prayer for us mothers,
I can't even describe what it was like when he reached out and placed my hand in his.
This mama's heart is full to overflowing!

Many of you have and continue to pray for him, and I am so thankful for those prayers!
Please don't stop now, my friends!
Now that he's back in the real world, the enemy will surely attack him around very corner.
It's already started and he's passed several tests already in the few days he's been home.

So, I just wanted to send a late Mother's Day greeting and hope yours was as blessed as mine!
As you see, I survived my Epic week...another post for another day...
...hopefully soon :)