A Stranger in the Woods 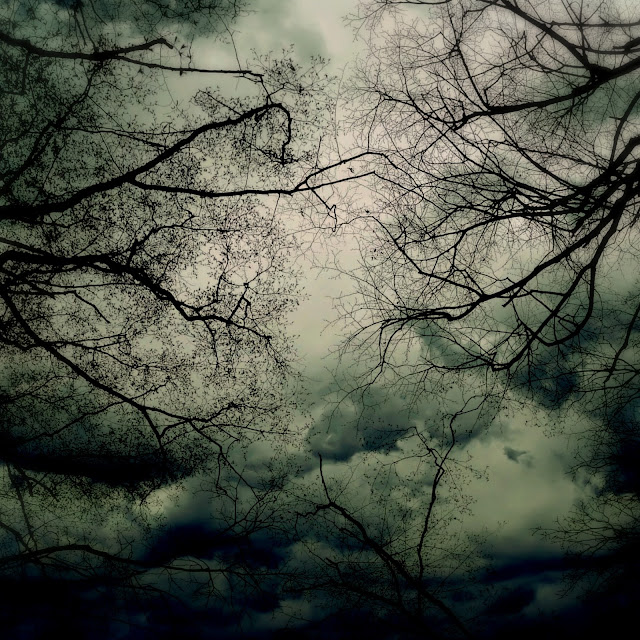 It was a dark and stormy night...

Not really...I just thought it would be a good way to begin a post titled
"A Stranger in the Woods" {{smile}}

But it is true that it was drizzling rain the day I discovered "the stranger".
I had Oscar outside, letting him do what doggies need to do, when I first noticed it.
I saw a few dapples of red against the mostly-still-green leaves right at the edge of the woods,
actually only several feet from where I was standing.

At first I thought it was a new holly or pyracantha bush that had come up volunteer,
but when I looked again, I knew it was neither one of those...
...and most definitely something I needed to investigate further.
I put Oscar back in the house, grabbed my point-n-shoot since it was wet outside,
and ambled back down to the edge of the woods where I saw red...uh...orange...pink...
...all of those colors, as I found out the closer I got! 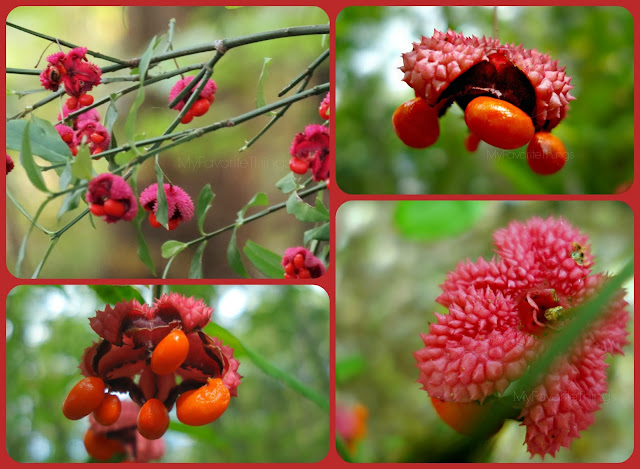 This is the stranger. 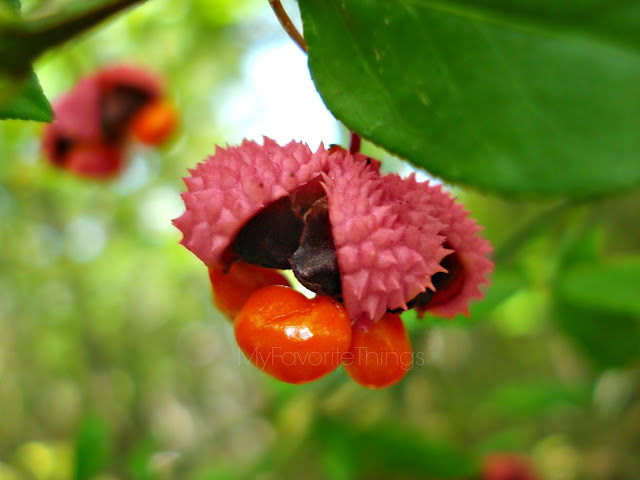 I was so excited!
In all of the 23 years living here, I had never seen anything like it.
I wasted no time snapping away between rain drops until my camera started getting wet.
(Those photos were pretty bad ...kinda blurry and dark ...so these were taken the next day in the sunshine.) 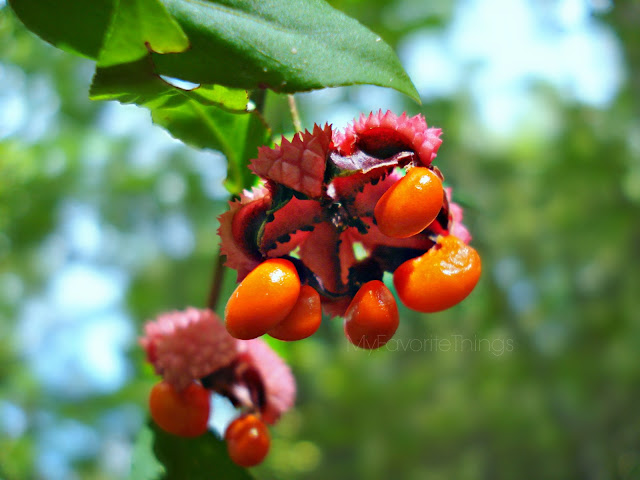 So as soon as I got back in the house I put in a Google search for...
"plant with reddish pink nubby pods with orange berries".
That's the best way I knew how to describe it. 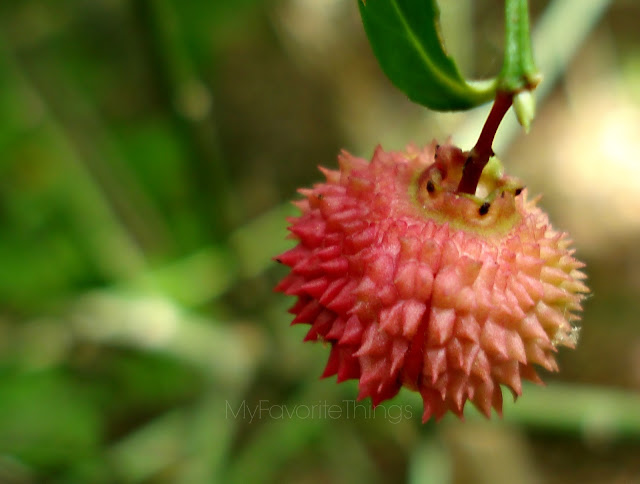 And then, there it was...
...something called Bursting Hearts or Hearts-a-Bustin',
Strawberry Bush or the by the official name of Euonymus americanus! 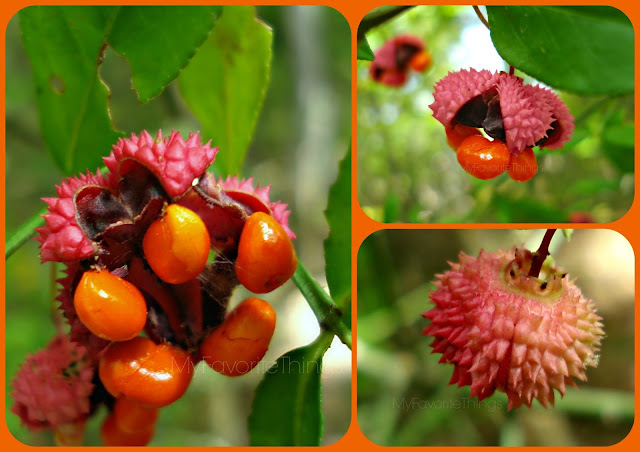 And here are a few tidbits of info I found on this other link.


Wildlife biologists often refer to strawberry bush as an “ice-cream plant” for deer. In fact, deer love strawberry bush so much that it can be non-existent in areas with hungry deer. For deer, we plant one, long row of plants spaced two to three feet apart and cover it with a “hoop-house” of chicken wire. The wire protects the plant and allows tender sprouts to escape the protection of the cage which can then be eaten by the deer.
Don’t forget that strawberry bush is an absolutely beautiful and unique native plant worthy of inclusion in your yard. The bright green shoots grow straight as an arrow (hence the name arrow-wood) and develop seed pods resembling strawberries that burst open in late summer exposing four or five bright red seeds that dangle from the open pods. Hence the other common name ‘hearts-a-bustin’. Whatever its name is, include this guy in your landscape if you’re interested in adding a unique, native touch that will be sure and receive plenty of positive feedback.

I guess that explains this. 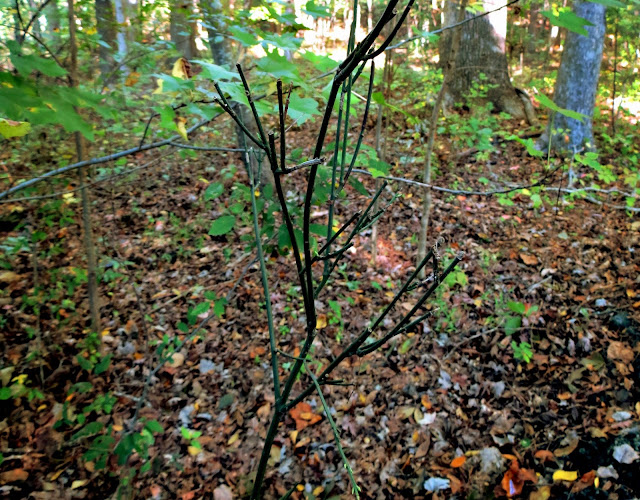 There are actually two other plants right next to the one that's blooming that I didn't recognize.
They are nothing but a few straight, green, sticks poking up from the ground.
It looks as though a few of our visiting deer have been enjoying some ice cream! :) 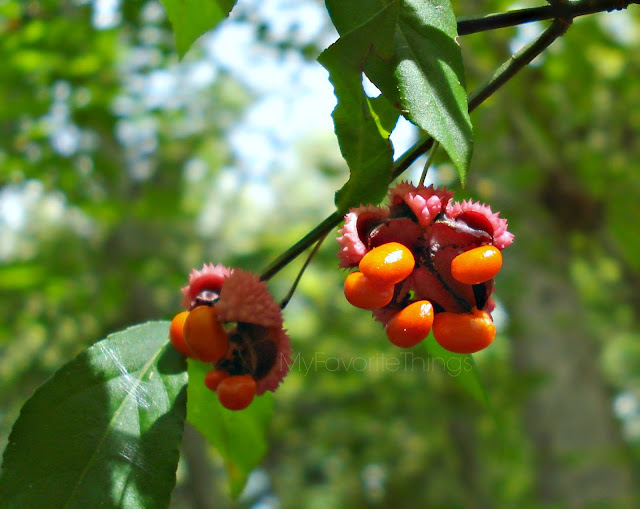 So have you ever seen this stranger lurking in your woods? 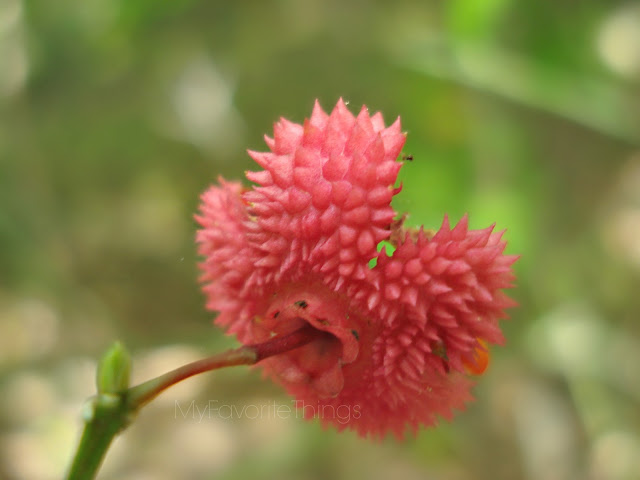 I'm sharing with Judith at Mosaic Monday.
Come on over and see what others are sharing!