I hope your week is going great so far.
It seems the summer is flying by (pun intended)...but you know me,
I'm always ready for fall to appear!
In the meantime, we have been enjoying an abundance of beautiful butterflies.
How about in your neck of the woods? 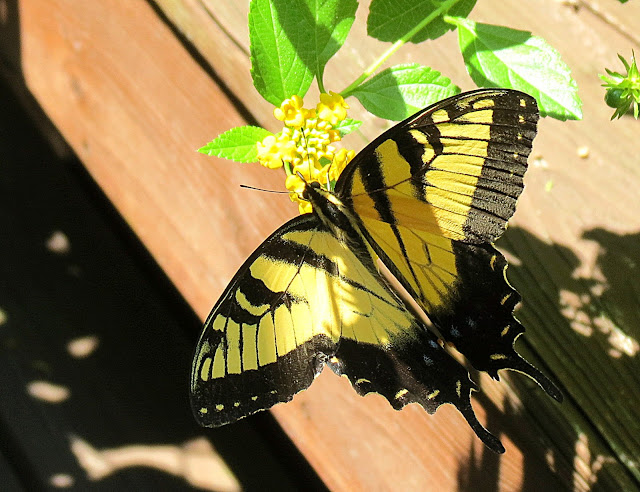 Also, this summer we've been feeding a few neighborhood feral kitties.
They are so tame and act as though they live here (I guess they kinda do)...
...still not getting close enough to pet...but almost! 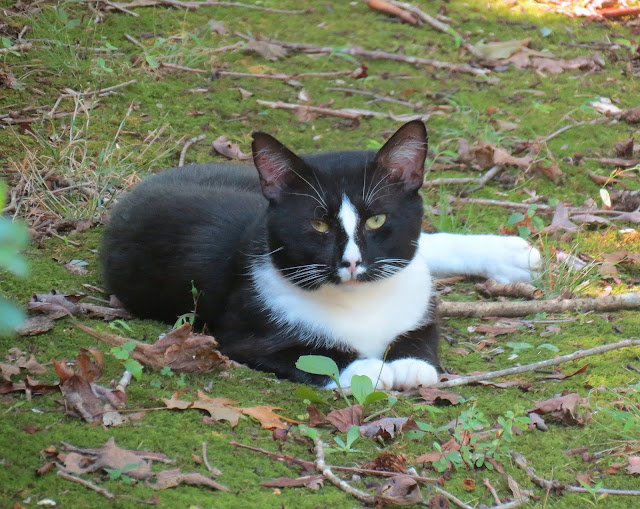 Isn't he a handsome boy? 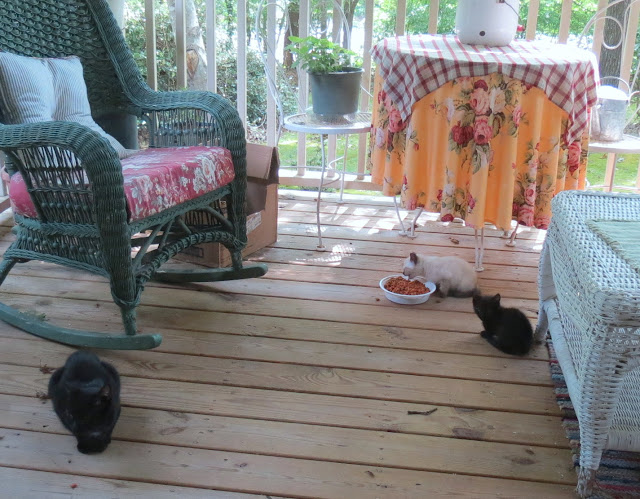 Here's Mama and two of her three babies.
The other one hangs out on my next door neighbor's back deck most of the time. 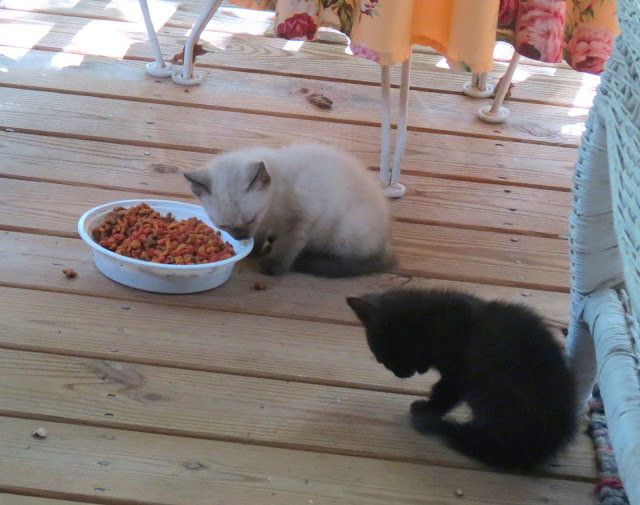 Isn't it odd that one looks Siamese? 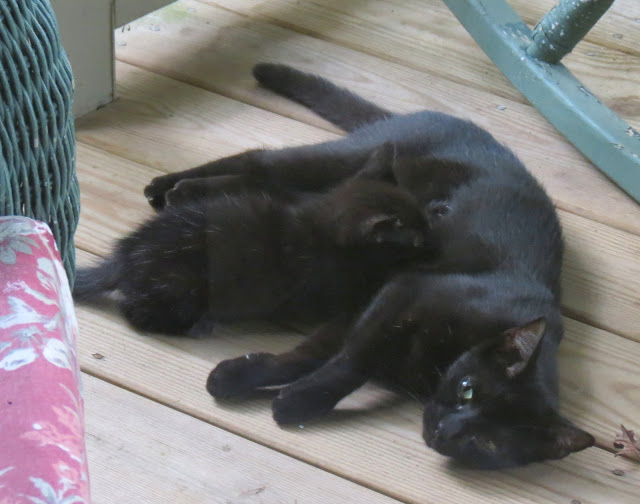 And this little one keeps hanging on to Mama, sharp little teeth and all.
I really want to catch the mama to take her for spaying but haven't done so yet.
Not sure what to do about the babies ...it's what you call a darling dilemma.
~
So much is going on here...more about that later.
But since it's Wednesday, it's also time for... 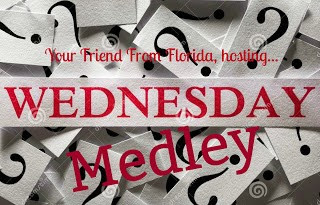 Terri asks the questions on her blog and we answer them on ours.
This week on August 23 is the day set aside to celebrate National Ride the Wind Day.
Hmmmm.....who knew?

1.  Tell us about the first airplane ride you took and do you like to fly?

I think I was about seven years old when I took my first ride in an airplane. My brother who lived in South Carolina and his buddy flew up to Ohio for the weekend in a small Piper Cub. I had stayed home from school that day because I hadn't felt well that morning but after I learned that my biggest brother had offered to take me on a plane ride, I got to feeling better really quick! It took some coaxing Mom a bit to let me go but she finally allowed it. I really felt like I was special because all my other siblings were at school and missed out. It was amazing and from then on, I was a fan of flying. After the weekend was over and my brother and his buddy were ready to fly home, they offered my sis, Barb, and I another ride before heading to school that Monday morning. He told Mom that we'd be flying right over our house and to be looking for us. I'll never forget that image...looking down and seeing Mom standing out in the yard waving to us with one hand and holding her comb in the other. She always wore her hair in a neat little bun, covered by her white prayer covering...never wore it down since it hung way down past her waist. She must have heard the sound of the plane and ran out of the house with her hair flowing, just in time to see us fly by!

2.  Have you ever gone hang gliding and was it on the beach with boat power, or from a mountain with only the wind and your body?
Never hang gliding but the closest I have gotten to it was when I actually flew a glider (pilot on board, of course.)


Right from the get-go, he had me at the controls...even let me release the rope from the tow plane. I flew it the for most of the flight but let him take over when it was time to land on that one little skinny landing gear in the middle of the plane. It was as close to being a bird as I'll ever get...the only sound to be heard was of the wind rustling against the plane...no motor, no nothing.
There is a sad ending to this story, unfortunately. The pilot of the glider who had been flying for over 25 years, crashed only a few weeks later and was killed. I'm really not sure what the details were of the accident...so very sad.

3.  Have you ever gone kite flying and with whom?
My first memory of kite flying was with my brothers and sisters in the vacant lot beside our house. One year, my brother Doug made a HUGE kite, probably six feet tall, from plastic dry cleaning bags and a wooden frame with a long tail. He flew it from a heavy duty fishing pole and that thing went up so high it all but disappeared into the sky. One day the line broke and it took days to locate it after it fell to the earth...about a mile away in a farmer's field...LOL! Of course later on in life, what kind of parents would we have been if we hadn't gotten kites for our boys to fly at the beach??

4. Experimental aircraft is quite popular as a hobby where Terri lives. Have you or anyone you know ever constructed a flying machine and did you ride in it?
No and no. That's where I draw the line.

5. Another big hobby around Lakeland is Radio Controlled Airplanes. Have you ever seen them flying or tried your hand at it?

I have never flown them myself but my boys have played around with them a time or two. To my recollection, they never had one of their own. Our grandson Parker, however, has built a drone from a kit and the aerial photography from it's camera is pretty amazing.

Please tell us something about your week.
It has been a busy and very productive few days around the Ray house. Adam flew in (speaking of flying) and combined a business trip to Raleigh with a work weekend to help out with some of the projects around our house. Combine all the Ray men together, including the big, strong grandsons and together they knocked out a TON of work, inside and outside! Remember all of those painting projects I have been trying to get finished for the past year? They are DONE! Adam is a whiz with the paint brush! To top that off, we had a realtor come out to give some advice and listing information. We were pleasantly surprised when he gave us a ballpark figure as to what it should list for and also that he'd be surprised if it didn't sell within a couple of weeks after it is listed. It looks like it may possibly be on the market by sometime in September. I'm still trying to wrap my brain around it all....BUT...it is ALL in God's hands. Every. Single. Detail.

So that's all for now...
hoping y'all have a blessed week!

Debby Ray
I am a transplanted southern girl, raised in Ohio, now living in Central NC. I am the baby out of eight children and being a part of a large, crazy family has been the biggest blessing of my life. I have been married to Jim for 43 years and we have two adult sons, three grandsons, one grand daughter and two weenie dogs, Oscar and Tasha. I love the Lord Jesus and do my best to live for Him, although at times, I fail miserably...His grace amazes me. I love capturing the beauty of the Creator through the lens of my camera and I pray that my humble little blog is an encouragement to all who visit! Blessings, Debby